The Toshiba KIRAbook is the first in a new line of premium notebooks. The KIRA branding will be produced under a separate wing of the company.
The new ultrabook is Toshiba’s first serious attempt to create a flagship notebook, squarely aimed at the higher end customer.
[gss-content-box]FREE shipping +

[/gss-content-box]
According to the marketing people at Toshiba, “Kira” means a fine cloth in Japanese. This word is used in an obvious reference to attempt to create a fine display that will compete with the likes of the MacBook Pro and Dell XPS 13. 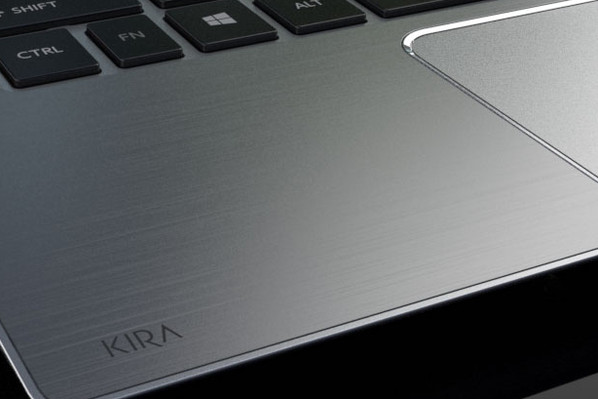 Toshiba KIRAbook is more than just the name of a notebook. It heralds the birth of a completely new brand. Each of Toshiba’s previous brands has targeted a particular segment of the market, and this new brand is no different. For example, the previous brand Portege was for the ultra-portables, Tecra for business customers, and Satellite for mainstream users.

An Overview of the Toshiba KIRAbook Ultrabook

Toshiba has waded into the deep end of the ultrabook pool with the new Toshiba KIRAbook. The big question is whether it can live up to the hype.

When it comes to notebooks- and, more recently, ultrabooks – Toshiba as a manufacturer has always made slightly odd decisions compared to its contemporaries.

While their offerings in the lower end of the notebook scale are solidly built, reliable and affordable, their mid-to high-end gear has had a slightly experimental feel compared to other Marques like HP and Dell.

This has been clear right from the defunct Libretto range to offerings such as the Portege R700.

What many customers have been looking for and missing from Toshiba is a machine that can genuinely be considered as a top-of-the-range, flagship ultrabook.

Dell has led the way for a while with the XPS range, with ASUS following suit with the Zenbook line. Even Acer has seen some success, offering ultrabooks to fit every budget.

Although the Toshiba Portege Z930 had a strong showing when the first wave of ultrabooks hit the market, much of this success was down to the low price.

Toshiba seems to have realized this shortcoming, and has now introduced a new premium line of ultrabooks starting with the KIRAbook.

The engineering involved in creating the Toshiba KIRAbook is nothing short of brilliant. Although its display is good enough like the Retina-equipped MacBook Pro, its weight and slim form closely resembles the MacBook Air 13.
In spite of this, the notebook’s chassis is neatly put together and stiff. Even the display is surprisingly resistant to flexing.

The superlative build quality of the Kirabook matches well with its large, high-definition display, which doubles as a touch screen.

The display has a wide hinge that prevents it from moving about when prodded by fingers. The glass cover also gives the device a good, high-quality feel.

Toshiba KIRAbook users will enjoy the ultrabook’s robust, clear sound, thanks to the beefy speakers that have been put into this slim notebook.

It the gadget gives a better experience when listening to music or watching movies without headphones.
The ultrabook also scores high on SiSoft Sandra Processor Arithmetic and 7-Zip tests, as it has a bundled Intel Core i7-5500U dual-core processor. This is one of the fastest low-voltage processors around.

Despite having several impressive features, the Toshiba KIRAbook also has a few notable drawbacks. The notebook has one little flaw: it has imperfect keyboard quality. Although the keys have a good layout, the alphanumeric keys are smaller than you would expect, while shift and caps lock are too narrow.

The ultrabook display, in spite of being technically brilliant, has some scaling issues. This is because many programs do not yet support high-res displays, and the scaling done by Windows to make items fit makes it uncomfortable for use.

Although there are some bits that could have been made better, the Toshiba KIRAbook is a great entry into the ultrabook market. By serving up a 2560 x 1440 display in a machine similar in size to a MacBook Air, while offering excellent performance and battery life, KIRAbook is a notebook that is highly recommended for those looking for a premium computing experience.