They don’t call the HP OMEN Desktop customizable gaming machine a silent screamer for nothing. It’s a computer that runs silently with optimum power. Expect the best of both tweaking and gaming worlds. Moreover, HP encourages users to practice a more hands-on approach by making this model’s internal structure upgrade-friendly and clutter-free.
[gss-content-box] This week’s offer for the gaming OMEN desktop:

The HP OMEN Desktop  is beautiful both outside and inside. The exterior armor plating and LED-illuminated windowed interior is an eye catcher. Like most gaming desktops and laptops, the HP highlights a modern and futuristic scheme without sacrificing performance.

Swapping the graphics card unit will no longer break a sweat- the same goes for the driver cage which can now be pulled out from the CPU’s right side.

HP also makes it a point to have the users enjoy tool-less tweaking and maintenance for standard hardware replacement. No more putting off fixing the OMEN Desktop simply because the screwdriver is missing in action. 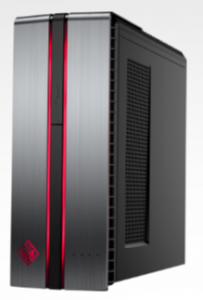 While sporting the 7th generation Intel Core i7 processor, the HP OMEN also has a base RAM of 16GB and a couple of NVIDIA graphics card choices (or the standard 4GB NVIDIA GeForce GTX 750). For those who prefer to amp-up these specifications, it can support up to 32GB of DDR3 memory and NVIDIA GeForce GTX 1080.

The HP OMEN’s hard drive cage is capable of housing two drives with an overall maximum capacity of 3 TB 7200 rpm SATA 512 GB SSD. As the saying “making back-up for your back-ups goes”, the HP OMEN desktop can serve its purpose as a gaming companion, a photo-editing/CAD assistant and a reliable keeper of important digital data.

And since gaming can suck a power supply dry, the HP OMEN customizable desktop keeps these parts functioning efficiently with its 600W PSU while maintaining a Greenpeace policy rating of 5.9.

While desktops may lack a major typical component laptops have (such as a WLAN card), the HP OMEN desktop takes pride in showcasing its front, back and even top options. Two superspeed USB 3.0 ports and two USB 2.0 at the top are just half of these options. Adding a Wireless-N LAN and Bluetooth adapter to this gaming PC is an available upgrade.

While the OMEN desktop does a wonderful job of providing a gamer’s essential needs, it still has some minor flaws. The list below summarizes this gaming computer’s pros and cons.

2. Futuristic and Modern Design. The HP OMEN desktop sports a sculpted armor plating which illuminates in the dark with LED lighting.

3. Tool-less Access. Changing hardware and doing maintenance turns into a straightforward task as this customizable desktop no longer requires a screwdriver to pry its side open.

5. Port-worthy. As expected with most desktops, the HP comes with a plethora of ports.

1. Lack of Available Mid-Range Graphics Card. HP’s GPU selection is mostly high-end. An option to choose mid-range cards for some models would be good.

2. Scalable Link Interface (SLI). Immense graphics experience may require more than just a single video card. SLI may not be needed by most, but can come in handy for some.

The HP OMEN Desktop rocks the desktop world with its extremely powerful performance, well-engineered exterior and interior design, and easy upgradeability. It’s no surprise that users will end up spoiling their visual and auditory senses with those customizable models.